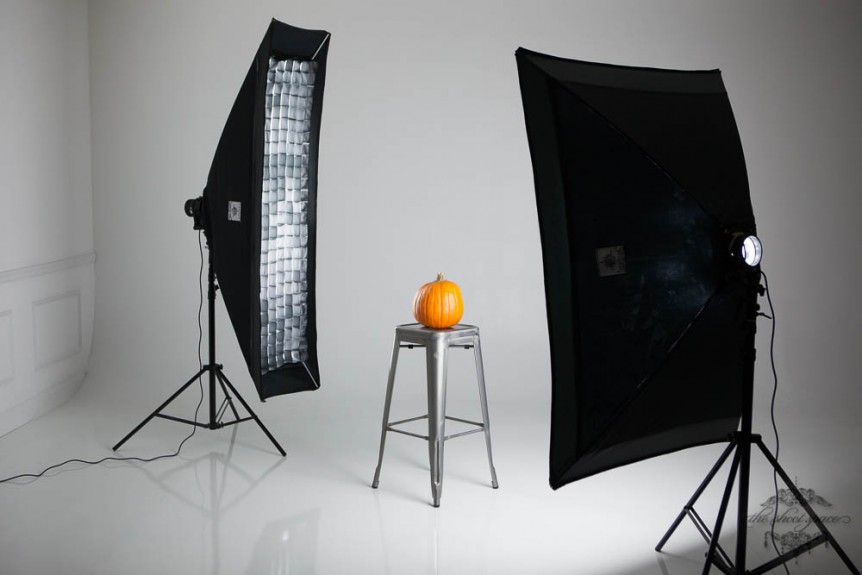 Well, we’ve been hinting at it for a couple of weeks, and now we can finally make the official announcement:  We’re now partnered with and sponsored by SweetLight Systems!

If you haven’t heard of SweetLight, hold on to your hats.  SweetLight is a new “hybrid” constant light and strobe studio lighting system!  This system can be used three different ways:

Here’s an example set up of the SweetLights, with a 3’x4′ softbox, and a 16″x60″ gridded strip bank, photographed on our cyclorama here at The Shoot Space: It’s the unique construction of the SweetLight System that makes these so verstaile.  In the back of each softbox is an opening for an interchangeable speedring.  Simply insert the speedring of your choice, and you can now insert your preferred brand of strobe.  Shown here are our Profoto studio strobes, but you can order any speedring to use with your own strobes.  With the Profoto inserted, the softbox functions just like any other softbox.  You can now use the power of your strobes to shoot at a low ISO and a relatively small aperture for that crisp, tack-sharp studio look. Using SweetLight as a constant light

If you’re going for a more natural, light-and-airy look, or if you haven’t quite got the hang of shooting with strobes, you can also shoot in constant light mode.  On the back of the softbox are two toggle switches that turn the internal constant bulbs on. By using a combination of the toggles being on and off, the lights can have 2, 4, or 6 bulbs illuminated for a low, medium, and high brightness setting.  The dome you see in the middle is our Profoto strobe, which is turned off.

The compact fluorescent bulbs are daylight balanced, rated at 5500K.  I did notice a slightly green tint to the images with my white balance set at 5500, but a quick settings adjustment and synchronization in Lightroom left me with beautiful neutral images.  The white balance was also consistent from one shot to the next.  What’s more, they are also flicker free!  This means these lights can be used without limitations for video (I’m looking at YOU, videographers!) and there are no shutter-speed limitations for shooting stills.  All of the images in this post were shot in constant light mode, with ISOs between 200-800, and apertures between f/3.2-f/11.  The lower ISOs and smaller apertures were generally used when shooting into the light source.  Otherwise, one could easily shoot with these lights at ISO 800 and aperture wide open — a very different look than when shooting with traditional strobes.

The softboxes themselves are manufactured in partnership with Larson Enterprises, so there are no concerns with the quality here!  However, all the softboxes do carry the SweetLight brand.  The boxes can be ordered with or without grids to help control and direct the light.

Here you can see a basic two-light setup using SweetLight in constant light mode.  Our main light is 3’x4′ with a 16″x60″ gridded strip for a rim light.  For the sake of this first test, I used one of the pumpkins we’ve got on hand at the studio for our upcoming Fall mini sessions.  My goal was to find something relatively round that wasn’t too shiny, so that one could relate these sample images to portraiture.  Surprisingly, pumpkins also mimic the translucence and reflectiveness of human skin — who knew?  The pumpkin is a bit more orange than most of our clients… we’ll pretend this client is an Oompa Loompa. Using SweetLight as a ring light

If you’re a big ring light fan, you can also configure this system to operate like a ring light!  Simply remove the strobe from the back of the box, pull the baffle off the front of the box, and voila!  Instant ring light.  Here you can see what it looks like to peer through the opening in the back… Once your lens is inserted into the opening, and you’re shooting an appropriate focal length, you will not see the bulbs in the periphery of the image.  Here again is our Oompa Loompa, with the main light functioning as a ring light, with the gridded strip as a kicker.  As with most ring lights, you’ll see the rapid light fall-off to the background.  This image was shot at ISO 200 – 1/200 – f/5 for the focus falloff, but you could easily increase the ISO and stop down for a deeper depth of field. Ok, so enough with the tech specs.  The really AWESOME part in all of this is that we now have an official sponsorship by, and partnership with, SweetLight!  These are the first of many SweetLights we plan to have here at The Shoot Space.  To get our feet wet, we’ve started our collection with the 3’x4′ softbox and two of the 16″x60″ gridded strip banks.  We plan to add a variety of sizes and shapes over time.

So, all my Shoot Space shooters out there, come play at the studio and try these bad boys out.  If you’re looking for some SweetLights of your own, we’ve got an amazing deal for you.  Go shopping at http://sweetlightsystems.com/ and enter promo code shootspace20 for 20% off your purchase!

These lights are already available for use by all of our studio members.  They will also be available soon to those renting the studio on an hourly basis!